The Lofthouse Interchange at the junction of the M1 and M62 in Yorkshire opened in 1970, and now carries around 40,000 vehicles a day. As part of a £3.6m renovation project managed by Highways England, project workers and specialists will replace 20 bridge joints across four bridges, as well as waterproofing the road to protect from damage by rainwater and salt. 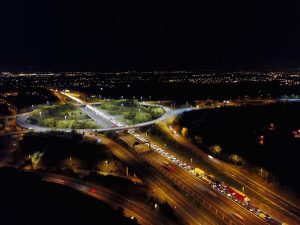 The first phase of the project required Buxton Water to perform the removal of 113m³ concrete using hydro-demolition from the joints in the bridges. This was completed in 4 weeks by 6 teams of hydro-demolition experts working back to back 24hr shifts to ensure the project was completed on time. The teams used high-pressure Hydro-demolition water jets to remove the concrete without damaging the structure to allow the Highways England team to install new brackets and plates and to start the waterproofing and resurfacing works. 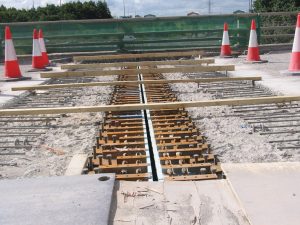 The roundabout remained closed to traffic while work was carried out, though the junction’s free flow link roads remained open.

In an interview with the Yorkshire Post, Highways England said the roundabout has been shut so that the “work can be completed in the shortest time possible”.

Highways England project manager, Russell Mclean said:  “This complex engineering project on one of Yorkshire’s biggest structures is necessary to maintain a route that is key in supporting the region’s economy. It will also reduce disruption in the long term, as the improvements reduce the need for future repairs.”