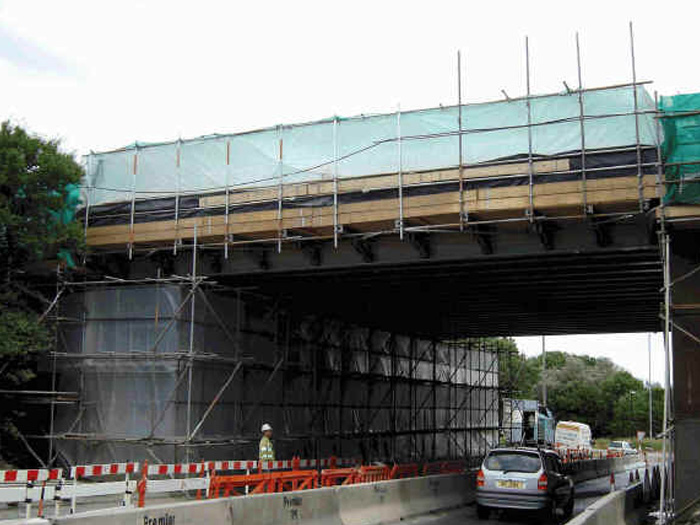 Two robotic hydrodemolition robots from Sweden’s Aquajet Systems are being used to remove 220m3 of concrete from the parapet beams and abutment walls on a major overpass near Newcastle.

The A194(M) Havannah Interchange bridges in Washington, on the outskirts of Newcastle, carry the dual carriageway over the large interchange or roundabout.

The Highways Agency, as part of its routine maintenance programme for the Area 14 Managing Agent Contract (MAC), is replacing significant areas of contaminated and spalled concrete over the exposed faces of the reinforced concrete abutments and deck edges that support the steel parapets of the structure.

These refurbishment works will preserve the integrity of the structures, which are over 35 years old and which were suffering from the contamination of the exposed areas within the spray zone from passing vehicles.

Hydrodemolition was specified for these works to minimise the health and safety issues for the operatives and to reduce the period of time that the trunk road was restricted to the public. A secondary benefit is that hydrodemolition prevents micro-cracking of the concrete which can be experienced with pneumatic or percussion methods of removing the defective concrete.

The £931,000 project is being undertaken by Carillion Regional Civil Engineering with the hydrodemolition works sub-contracted to Buxton Water, one of the UK’s leading hydrodemolition specialists.

High volume work
Traditionally, this work would have been undertaken by pneumatic-percussive equipment. However, this method of removing the concrete can cause problems. The most significant of which is that the action of jackhammers creates micro-fractures deep into the structure, mostly around the interface between the reinforcing and the concrete. This significantly weakens the structure as it undermines the cohesion between the concrete and its reinforcing. In addition, jackhammer work is noisy and dusty, and over a period of time the operators may begin to suffer from white-finger nerve damage.

Hydrodemolition has numerous advantages over traditional pneumatic-percussive methods of concrete removal including: no dust, less noise and also it is far quicker. Water is emitted from the nozzle faster than the speed of sound at a pressure of approximately 15,000 psi. When applied to concrete this jet of super-pressured water penetrates the pours of the concrete, compressing the air within, thereby creating a micro-explosion which blows the concrete away leaving the embedded reinforcement intact.

Because the process is vibration-free, it removes the concrete without causing damage to adjacent areas which can often happen when pneumatic tools are employed, leaving the structure prone to stress fractures in the surrounding concrete. When using percussive tools there is also a significant increase in the likelihood of damaging the steel reinforcements thereby further reducing the life expectancy of concrete repairs.

Hand lancing has been used in the UK since the 1970s when its introduction proved to be a quantum leap forward for concrete repair because it paved the way for the end to noisy, dusty, time consuming and relatively dangerous pneumatic drill operations.

The lance consists of a jet nozzle located at the end of a high-grade, rigid steel pipe. Typical removal rates are 1m3 per crew per day. A dead man’s handle is fitted for safety purposes, which will immediately shut down the water supply should the operator’s grip be released.
This traditional hydrodemolition method has tackled the inherent problems associated with concrete removal by pneumatic-percussive means, namely it is noisy, dusty, time consuming, can be dangerous, relies heavily upon the operator’s judgment, does not consider variations in concrete strength and provides a poor surface for new concrete adhesion.

Unfortunately, hand lance productivity is limited to the backwards force that the operator is able to control. This reaction force is limited by EU guidelines to 250 Newtons which means that at removal rates of 1m3 per crew per day, they are best employed for situations where small repairs need to be undertaken. Robotic hydrodemolition units are able to deliver over five times the quantity of nozzle water and with removal rates of 5m3 per robot crew per day are best suited for larger jobs where time is of the essence.

Making use of the robotic Aqua Cutter HD-6000, the high pressure water is delivered to the tracked robot through flexible high pressure hoses. Inside the robot there is a gimble mounted lance with a nozzle attached. The nozzle, with an opening that varies between 2.7 and 3.0mm in diameter, compresses the jet of water and delivers over 200 litres a minute at 1000 bar (15,000 psi). The lance is mounted onto a roller assembly which traverses on a 1.5m-long beam delivering a consistently high pressure jet to the concrete beneath a hard-rubber protective skirt.

The rubber-tracked robot is operated and controlled through either a wireless or a hand-held, lightweight 10m-long hard-wired remote system which also features a shoulder harness for operator comfort. On this site, Buxton Water operated one of each type.

“We bought both,” explained Neil Cameron, the Operations Manager, “because we weren’t sure which would suit our operations and our operators the best….but at the end of the day they are both great bits of equipment and do exactly what they were bought for, but the operators definitely prefer to work with the wireless version, it means they can be up to 30m away from the action-end and in the dry.
Robotics are definitely the way forward when it comes to hydrodemolition. It would not be possible to remove this volume of concrete any other way.”

We chose two units for our hydrodemolition work, “explained Mark Hothersall, Director for Buxton Water, “because they have an on-board diesel engine which provides the powered hydraulics to control the robot. Many similar units require a separate power unit, which means another piece of machinery that you need to own, bring on site and maintain.

Both of the Aquajet units we own are self-containing. All we need to do is provide the water and a powered pumping unit to deliver water to the robot unit. Fortunately there have been no major surprises. These units do exactly what they are designed to do, that is to say remove a great deal of concrete very quickly.

There is no doubt they are more efficient than hand lance work for a large job like this and, as you can imagine, the operators prefer them as well.”

The operators can select the diameter of the nozzle (which consists of a specially designed inverted ceramic thimble-like unit encased in steel) to meet the requirements of the job they are working on.

This blasts the water at extremely high pressure into the concrete at any required angle to undercut the concrete to be removed. Indeed for the parapet beam work, the nozzle’s angle of attack was near vertical whilst on the abutment work, it was virtually horizontal.

The operator can programme the robot to vary the angle of attack, the lance speed and the degree of oscillation across a prescribed area. By varying these parameters, the operator can determine the number of passes needed to meet the specifications for removal-usually this means removing the unsound concrete whilst leaving the sound concrete with a superior bonding surface, but alternatively it may involve removing concrete to a certain depth.

In addition, because the contract times are significantly reduced, this leads on to other significant advantages, including reduced support equipment, reduced road closures and associated disruptions, as well as reduced manpower requirements.

Operator delight
“It is a lot quicker than using a hand lance,” said Alec Gill, Principle Robot Operator for Buxton Water, “with a robot you can shift between 5 and 10m3 in a 12 hour shift. Once it is set up you can just leave it to perform. For this job, I set the nozzle about 25mm off the surface and do a 300mm test patch to see if I am removing concrete up to the correct depth.

As far as maintenance goes, the nozzles seem to last for ages, but its just simple mechanical things that we need to keep a look-out for such as grub-screws, oscillating rings and bearings which only take about 5 minutes at the end of a 12 hour shift. Overall our anticipated maintenance costs are £4 per hour of operation.

Safety
Safety benefits are also significant including noise reduction due to the nozzle operating within the rubber skirt. Due to this being a ‘wet process’, the operation is dust-free as well as being vibration-free thus eliminating the potential for white-finger syndrome.

The process can be remotely controlled thus distancing the operator from the hazards of the cutting area, leaving him free to adjust the operating parameters so that unsound material can be removed to a prescribed depth in a process known as “selective removal”. For added safety, each Aqua Cutter unit has two separate cut-off buttons.

To ensure that, in the unlikely event of a high pressure hose or coupling failure, each section is clamp-wired to prevent flaying. Although noise levels at the nozzle are in the range of 110dB (but are reduced about 85 dB by containment within the blast canopy), the resulting levels are significantly lower than the peaks encountered with pneumatic-percussive methods of concrete removal.

Isolation and protection from the active roadway is provided by a framework of Harris barriers with two layers of blast-proof netting. On the parapets, the removed concrete falls onto decking which hangs off the bridge.

This decking consists of scaffold boards overlain with steel sheeting to prevent damage to the boards when the jet breaches through the concrete.

The debris is removed from the boards on a regular basis, usually at night, as there are weight carrying limits on the scaffolding.
On the Havannah Interchange job, the need for site safety is paramount. This is made all the more difficult due to the tight area set aside for the robotic units, high-pressure pumps and their associated engines, static water tanks as well as site offices and road tankers delivering water, as well as being located alongside an active carriageway.

Rough but bondable
Once concrete removal has been completed, the end result may appear uneven, but the fact that the remaining concrete has a consistent strength across its surface will improve its bondability and thus the life expectancy of any repair. Contractors are sometimes penalised for removing concrete beyond a prescribed depth. To minimise this cost-risk the operator can use the robot to remove the concrete to a prescribed depth with hand lancing being used to remove any high spots.

Whilst hydrodemolition robotics can be used to undertake a job of any size, site establishment costs usually preclude them from working on a location where only very small amounts needs to be removed. Hand lance work requires 9 gallons of water/minute whilst robotic units operate with 50 gallons/minute.

This factor needs to be considered when bidding for a contract, indeed at the Havannah Interchange project, good quality water needed to be brought in by road tankers.

This additional cost can be avoided if arrangements can be made to tap into the established public water supply via standpipes. These two Aqua Cutter units are each fed water by a triplex plunger pumping units with a maximum rating of 197 litre/minute at 1500psi, powered by a 500hp Caterpillar engine.

“By using the robot for hydrodemolition work,” concluded Mark Hothersall, “the ultimate saving to the client is in time and its associated implications namely the costs of traffic management (especially when you have night-time road closures), site cabins, extra manpower for clean-up crews etc. Infact the saving to the client is more than the value of our contract.”