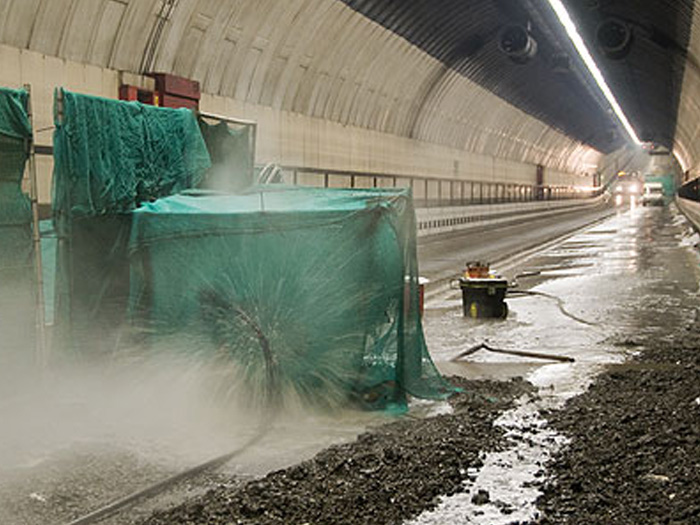 Our contract involved removal of patches of concrete from the road deck of the Kingsway Tunnel.

Works were undertaken over 26 weekends within a 7 month period.

On each weekend the tunnel was closed after the Friday evening rush hour, and the challenge was to remove as much concrete as possible within a 20 hour period, allowing time for the main contractor (VolkerLaser) to complete the repairs with sufficient curing time for reopening early Monday.

The works programme allowed for a ‘gradual build up’ in weeks one and two to ensure the systems and processes worked, and thereafter the target was a minimum removal of 13 cubic metres on each weekend.

Repair patch sizes varied from less than 0.1 square metre up to 80 square metres, cutting to an average depth of 110mm to expose the embedded steel.

Buxton’s used a combination of robotic and hand lance systems to complete the works. The Aquajet HVD 6000 robot was used on larger patches (greater than 0.25 square metres), with hand lances being used on smaller patches and for the trimming up of larger areas.

Actual productivity per weekend varied according to number and sizes of patches to be removed.

Commenting on the successful completion of the scheme Mark Hothersall (Director) said:

“We were always confident of exceeding the minimum requirement; however, we were more interested to know just what could be achieved in such a short working timeframe. We actually achieved an average removal rate of 14.8 cubic metres per 20 hour weekend shift, and peaked at 17.9 cubic metres.”

“Such consistently high levels of productivity not only demonstrate the effectiveness and efficiency of robotic hydro demolition systems, but also Buxton’s ability to manage the logistics of such a demanding project.”

“This job could not have been completed without the outstanding contribution from our jetting crews. We remain grateful for their willingness to disrupt seven months of weekends!”